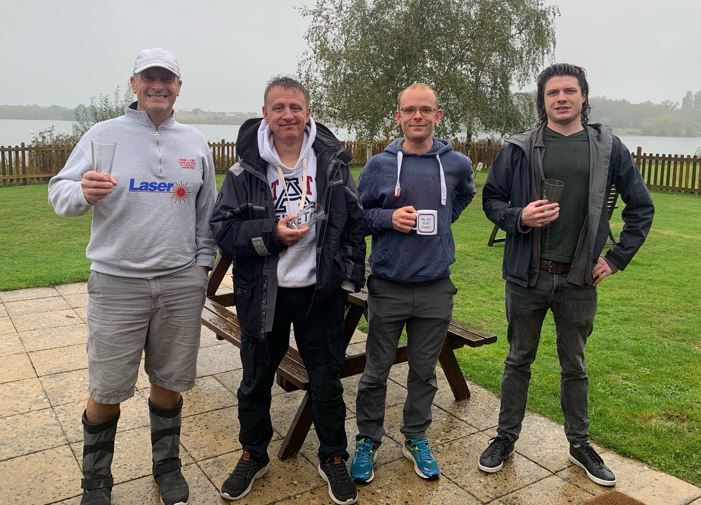 13 boats, including 4 visitors, braved the rather miserable weather to compete in the ILCA open. During midweek the forecast was for 20 knot winds with gusts of 30 and heavy rain but overnight on Friday the forecast improved and the 1st race kicked off in a fairly steady 10 knots with light rain and grey skies. John Ling (Bartley SC) had a great start and lead the field throughout the race to take the honours, followed by Alex Frost and Bill Gribble from South Cerney SC.

The rain got steadily worse as the second race got underway but the wind, although reasonably steady in terms of direction, was a bit lighter so the Race Officer, Paul Kimmens, shortened a couple of legs of the course to compensate. John Ling had another great race making it two bullets followed by Bill Gribble and Alex Frost.

We then headed off to the club house for lunch and to dry out a bit. Returning from lunch the wind dropped to almost nothing and what little wind there was was coming from all directions, getting any further racing in appeared to be a challenge. But then the wind picked up, shifted right by about 45 degrees and settled. A quick course change and the third race got underway in a stiff breeze with some big gusts. This time the course was a triangle sausage and several competitors had a swim at the gybe mark. The run also proved to be challenging with a few death rolls and lots of concentration on faces as the competitors battled with the breeze. Bill Gribble had a bad start and left the start line towards the back of the pack but battled his way back up to finish 5th. Alex Frost and John Ling battled hard all through the race but John Ling took line honours to make it three bullets in a row.

The wind dropped a bit for race 4 but unfortunately the rain didn't. By this point the competitors were looking a bit bedraggled but they all stayed out for the last race. John Ling continued his winning ways making it an a very impressive 4th bullet followed by Richard Lymposs (Bowmoor) and Alex Frost.

A great effort by all the competitors and race management team to complete all 4 races in the rather miserable weather.

To round off the day the winners were dragged out in the rain again for a photo! From left to right:- John Ling, Bill Gribble, Adam Napier, and Alex Frost.

Many thanks to all the competitors and everyone involved in the event, hopefully next year we might get some sun