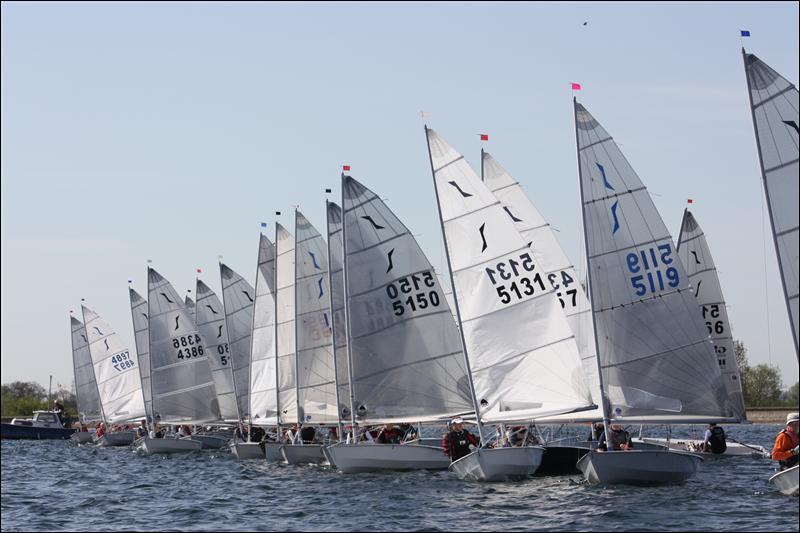 The Jack Holt designed singlehander has been around since 1956 and 56 years later the class is stronger than ever.

Initially, the National Solo was built in wood with wooden spars and a cotton or terylene sail with wooden battens. My Dad often tells me the story of a chap called Danny Butler who would arrive at an open meeting and empty a few dozen battens out of his Hillman Tourer (the one with wooden framework) and select a set to match the conditions of the day. Incidently, Danny practically ran the class in the seventies, I am not sure the association would have flourished without him.

There were many home built boats but ultimately the professional builders including Jack Holt working on the banks of Putney, and Alec Stone, based in Salcombe, produced most of the hulls. Alec won the Nationals' 8 times between 1958 and 1970 and the 'Worlds' in 1971 at Hayling Island and his National Solos' were the choice of many champions through the seventies. Many clubs adopted the Solo, along with the Enterprise and the Mirror and numbers snowballed with over 100 entries at the Nationals'/Worlds' quite common.

Aluminium masts replaced the standard 'Collar' wooden masts and sailmakers' such as Mountifield and Musto+Hyde were developing sails to match masts provided by Holt, Proctor and Needlespar. There were also some masts produced which pushed the boundaries of legality by fitting thin metal plates to the top to adhere to the mast measurement tolerances.

Fortunately, the Solo Class has always had some fantastic measurers who have kept members, builders and manufacturers on the straight and narrow. Martin Grounds, Jim Gates, Ron Green and Gordon Barclay must take much of the credit for guiding the class and protecting Jack Holt's ideology over the last 5 decades.

The Solo was also being built and sailed in Holland and demand was high enough that whole batches were sent to clubs such as Brouwershaven and Enhuizen. The Dutch were/are great sailors, and they collected 5 World Championships between 1972-1980.

The Solo was now also being built in GRP and also as a composite by Seamark-Nunn and some other plastic manufacturers though wooden built boats continued to claim the big prizes.

In the mid seventies a chap named Richard Lovett started building and sailing the Solo. He was a supreme craftsman and also had some ideas to produce a fast hull. The rules allow +/- 5mm for builder error and this was exploited by him and other builders to make the bow entry finer, to widen the hull to promote lift onto the plane and a flat aft section to increase downwind performance. Richard also introduced the flared gunwhale which was appreciated by many pairs of legs when hiking. Interestingly, there are now a few Solos' with sharper gunwhales which theoretically produce more efficient leverage but require hiking pads! Another stand-out feature of the Lovett Solo was the beauty of the build quality and was matched by longevity of top level performance.

The early eighties saw the dominance of the Lovett hull and, matched with the Needlespar or Proctor C' mast and the Batt or Hyde sail proved super competitive and was used to win by both Geoff Carveth (Nationals' 82, 83, 89, Worlds' 83,84, 89) and Ken Falcon (Nationals' 85,86,87,88, Worlds' 85,86,87). There were some exceptions, Simon Cray won the National title at Brixham in 1984 in an Uttley built wooden Solo with a Hyde sail and lots of mast rake. He also wore a weight jacket, the last time one would be allowed.

Richard Willetts at Runnymede Dinghies was building wooden Solos' and his boats won many 'opens' in the early eighties, Pangallacticgargleblaster was a stand-out Solo. There were issues with the strength of the GRP hull and so a rule change was adopted to allow foam sandwich construction.

Omega were first to produce a foam sandwich hull which proved popular, the hull finished 4th in '84' but the wood hull still held court.

There was much interest in the class and other builders were starting to produce fast Solos'. Bob beckett was building fast hulls and he instigated the construction process of dropping the centreboard case into the hog. This reduced the age old problem of a leaky case.

Tony Thresher did much to develop Solo construction, using epoxy resins and female moulds, he was able to build the hull the right way up for the first time. Although the finished article did not match the looks of the Lovett there was no doubting the speed through the water. Tony also helped develop the double thick floor panel which significantly strengthened the overall product. Into the nineties and the class was showing no sign of inactivity.

World/National Championship attendances were slightly down, a result of the dilution of the singlehander into other classes but the Inland Championship, first held in 1983 was flourishing, peaking in 1998 with 116 entries. Gerry Ledger based in Southend built the Solo that Geoff Carveth used to win the Worlds'/Nationals' in 1991/93 and in 1992 he used the first Kevan Gosling built Solo, 'Monolog'. All the ideals that Lovett had treasured were lovingly re-created by Kevan but with the use of modern glues and finishes and of course Kevan's own 'fast shape' imput. The Gosling hull is still the most beautiful of all the Solos' built.

The mid nineties saw the emergence of the Severn Sailboat plastic Solo and the energy of the Bond Brothers, Andy and Graham. The two lightweight sailors won some big titles and showed that the foam hull matched with hard hiking and 100% commitment could finally prise away the perceived dominance of the wooden hull. There were still some fast wood boats being built, Vic Crawshaw's hulls showed good pace in the hands of his son Cliff. Andy Miles in particular had much success in a short period with Jim Hunt and Geoff Carveth winning the Worlds' and Nationals between 1998 2000.

The class allowed FRP construction in 2000, the global ramifications on forest destruction resulted in a lack of quality of wood and increased costs. These were some of the factors that influenced the decision. Also, FRP had been adopted by some other prominent classes with much success in both numbers built and performance/longevity.

Winder boats, with input from Jim Hunt, produced a hull that dominated the major events for 6 years. Jim also helped develop a mast sail combination with the Proctor Cumulus/North SM8 which proved equally effective. Not to say that other sailmakers were dormant. Graham Scott, using his expertise in the Contender developed a bendy mast/sail combination that contrasted starkly with the stiff cumulus/SM8 but which offered hope to the lighter/female helm. Jon Clark at Edge sails had cut his teeth at a number of sail lofts in the eighties and had/still has prolific success with his sails. Speed sails developed their own mould and produced a super FRP option from the Winder, and using a sail developed in house by Andy Davis won the Nations' Cup (was Worlds') at Paignton in 2007 and the combination was also very successful at many Inland events.

By now, the number of new builds was averaging over 100 per year, that is OVER 100, the decision to allow FRP had been overwhelmingly successful.

In 2007 Steve Boon, who had been successfully building wooden Solos' made the decision to produce an FRP hull moulded by RMW and market it as a complete off the shelf package. The Solo would be fitted out and rigged with expertise from Jim Hunt on control systems. It would include a Proctor Cumulus/ now D+ and a North laminate sail. Charlie Cumbley campaigned the first one and was straight away on the pace, winning the Nationals' in Torbay in 2008. Dave McGregor won the Nations' Cup in Holland in the Boon and so followed much success.

The Boon FRP has since been moulded by Ovington Boats but now Steve has his own facility and is very busy, building and finishing his Solos'.

Speed sails are producing FRP hulls to a similar specification as do Winder boats and soon John Poulson/P&B will have his FRP boat on the water. Kevan Gosling is still producing fast fabulous looking Solos' but now uses ply/foam/ply for maximum weight/stiffness ratio. Steve Parker is also producing a composite Solo.

Incredibly, the National Solo continues to thrive despite the plethora of singlehanders in the market place. 1000 new builds in the last twelve years and 990 NSCA members in 2012.

Thanks to the creativity of builders/sailmakers throughout the decades.

The controlled development policed by our measurers.

The voluntary contributions of our committee, past and present.

The commitment to race from our members and the vision that Jack Holt had in the first place.

The Solo is alive.

The National Solo Class Association has a brilliant website at http://www.solosailing.org.uk where you'll find much more information including boats for sale.